A significant part of Trailside Museums and Zoo’s mission is encouraging the formation of partnerships between professional scientists and naturalist volunteers through citizen science opportunities. Volunteers interested in protecting the environment can lend a hand in gathering important information about local ecosystems. The data are used to advance research and inform conservation scientists working with park managers and policymakers. This information guides decisions in regards to parkland use and conservation stewardship.

Citizen scientists are volunteers involved in long-term research and special interest projects. The Palisades Interstate Park League of Naturalists (PIPLON) is the leading volunteer group in these opportunities. Whether surveying birds, observing plant and insect associations, or tagging monarch butterflies, citizen science volunteers contribute greatly to valuable research. Obtaining this information aids in our understanding of the changing climate, the health of natural resources, and the quality of plant assemblages and wildlife habitats. Becoming a citizen scientist is a great way to contribute to the science community and learn about local ecosystems. Whether you like being outdoors or indoors, there is a project for you to participate in!

To get involved, fill out and send in our Volunteer Interest Form. Tell us about your skills, interests, and availability. We will match you with an opportunity that will work for you and advance our conservation research and sustainability goals. 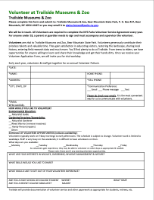 Each year, wildlife counts are conducted in the winter and summer. Teams of naturalist observers count birds, and over the years, other wildlife that they encounter throughout Harriman and Bear Mountain State Parks. This provides a fuller view of the wildlife assemblages in our forests.

The winter Orth Count dates to 1946 under the leadership of Jack Orth, the director of Trailside Museums and Zoo at the time. It’s held one day in the first week of January. The summer Silloway Count spans 10 days in June. The Silloway Count started in 1988 and has been carried out annually since 1990. For both the Orth and Silloway Counts, naturalist teams fan out across the parks and come together at the end of one day to tally their observations and share stories and food. These annual counts provide data on bird and wildlife demographics that help us understand landscape and climate change and guide conservation stewardship.

During winter, Bald Eagles are counted at seven communal night roosts on three winter evenings. The roosts are located along the lower Hudson River Valley between the Newburgh-Beacon Bridge and the Tappan Zee Bridge. Night roosts are typically located in large trees with an east to southeast aspect. They are near open water, abundant food resources, and are away from human disturbance.

In cold winters, Bald Eagles concentrate along the Hudson River where the waters are kept open for shipping. In warmer winters, they are dispersed across inland mountain landscapes with open lakes. Thus, Bald Eagle numbers at the surveyed night roosts fluctuate with winter weather. The data are shared with the DEC and inform scientists and conservation managers working to protect roosts and eagle habitat from encroachment for long-term sustainability of local populations.

In fall, volunteers gather daily on the southeast-facing slope of Bear Mountain to count hawks and other raptors southbound to their winter habitats. In migration, raptors congregate, and so they are more observable than when dispersed across their summer habitats. The data also contribute to databases of the NorthEast Hawk Watch (NEHW) and the Hawk Migration Association of North America (HMANA). New volunteers are needed for one or more days per week. The Hawk Watch is a social and relaxed way to engage in citizen science. JOIN IN

Lily Pond is a small, shallow beaver pond near Lake Sebago in Harriman State Park. It is situated in a relatively infrequently visited portion of the Park and offers an opportunity to track relative abundance, biodiversity, and population changes in the flora and fauna over time.

Alan and Della Wells are members of PIPLON. They have initiated and assisted with several citizen science projects, many of which take place in Lily Pond. Starting in 2005, as part of the New York State Dragonfly and Damselfly Survey, they began periodic monitoring of odonates at the site. Over the years, the monitoring program has increased to nearly weekly coverage throughout most of the year, expanded the habitat comparisons (added meadows and roadsides to the original pond survey), and increased the range of organisms covered. This nearly complete assessment of life in Lily Pond includes the monitoring of pollinators, plants, birds, herps, fish, and mammals.

These additional research projects have been launched in the following manner:

Findings of the Lily Pond Survey are freely shared with Trailside Museums and Zoo, NYS Natural Heritage, and local scientists. Since its inception the Lily Pond Survey Project has involved more the 20 professional and citizen scientists and is now on its way toward accumulating a detailed long-term record of the flora and fauna that will be useful in assessing changes throughout the regional Parks.

Loss of habitat has affected many species in New York, including New York’s state bird, the Eastern Bluebird. Citizen science initiatives at the local, state, national, and international level have been working to help offset the decline by installing nest box networks. Starting in 2010, Rockland Audubon Society partnered with PIPC to install and monitor nest boxes for Eastern Bluebirds on Iona Island (Please note: a special access permit is required for access to Iona Island), Elk Pens, and Silvermine. Over the years, both Eastern Bluebirds and Tree Swallows have successfully fledged young out of these nest boxes. Nest boxes for American Kestrels were also installed, and while no Kestrels have utilized them, an Eastern Bluebird’s family did use one on Iona Island several years ago!

Fungi are perplexing and underappreciated. A citizen science mycology project is underway in Highland Lakes State Park. Many years ago, a former NYS Parks employee initiated a “Master List” of fungi in the regional area. This list has since been passed on to Pat and Ray Clyne, a mother and son duo specializing in and sharing a love for mycology. They have since reassessed, documented, and sorted this list for rarity and geographical exclusion. The original account documented about 100 species, which has now blossomed to well over 150 covering many genera, orders, and classes, including some often overlooked and pathogenic fungi. By assembling a comprehensive list of local species, we are better able to track important population trends, including species declines and the establishment and impact of invasive and pathogenic species on the biome. 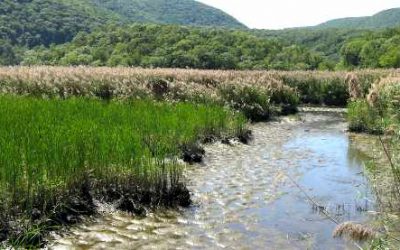 By 2000, the biodiverse brackish tidal marshes of Iona Island were overrun by the invasive, non-native common reed,...

END_OF_DOCUMENT_TOKEN_TO_BE_REPLACED 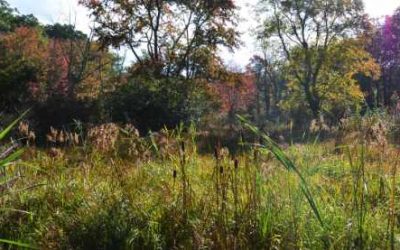 Protecting and restoring imperiled habitat is a critical component of combatting the decline of wildlife populations. With this notable importance in mind, research staff have been hard at work to protect native species that are suffering from habitat loss.